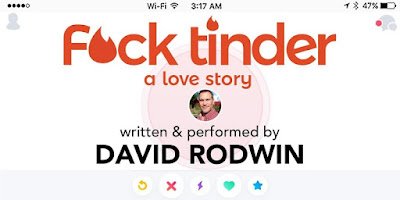 When a show begins with the invitation for the San Francisco, mostly thirty-something audience to yell “Fuck Tinder” so loud that they can be heard in Oakland — and they do — it is clear that we are in for a wild and wooly ride.  After all, the nearly fifty-year-old guy before us declares that following a sudden, surprise break-up with his girlfriend, he decided to turn to the dating (more accurately, hook-up) online site Tinder, where he was hoping for “free sex, right now, often weird.”  During the next ninety minutes, David Rodwin leaves no bed sheets unruffled as he describes in full, often XXX-rated detail the up’s and down’s of his two-plus year journey swishing right (yes) and left (no way) on Tinder, looking for his true soul mate – and if not that, then at least a hot, one-night stand.  Returning to PianoFight for a third and final encore of his F*ck Tinder: a love storybefore heading on a multi-city tour through the U.S., Australia, and Canada, David Rodwin bares it all in a monologue that elicits many laughs and eventually even a few tears.
David’s escapade begins with so many Tinder matches coming in at the same time that he needs a spreadsheet to sort out his options.  He soon finds that if he waits too long to analyze the accumulated data, the potential set of girlfriends quickly becomes null.  One of his first successes is actually not the result of a Tinder swipe but of going to synagogue for a Friday night service, somehow leading from prayer in temple to doggy style in his bedroom to her deciding it is time to go upon climax.  “It feels dirty; I feel like an escort, and it’s kinda hot,” he recounts almost in a panting sweat; but when she leaves, he recalls, “It is only 9:30.”  That leaves him to what becomes his favorite way of spending time alone when the magical app does not work the way he wants:  “I get high, watch “South Park,” and masturbate.”
With much enthusiasm, moving around the small stage in an often hyped-up, arms-flailing state, David proceeds to describe various one-time adventures during that first year of online searching — from a nursing, hot mom who shows up at 11 a.m. with her baby in tow to a Russian woman who arrives wearing a t-shirt emblazed with the last eight lines of his online profile.  Stories pour forth with images often hilarious, sometimes steamy, always entertaining.
Fifty women are his rendezvous partners out of the 500 match-ups during that first year, but only seven actually are climatic events in the biblical sense, leaving David 325 nights alone in his bed (getting high, watching “South Park,” etc.).  But as Year Two progresses, our storyteller’s tone and mood begin to shift as into his life enter a true and lasting friend with both free-love and free-drugs benefits named Meadow and a true heart-throb whose eyes send him swooning named Joan.
David’s story begins to leave behind some of its heretofore locker-room bravado and to reveal more of his own insecurity, vulnerability, and self-doubts.  We also begin to feel and see in his tear-wet eyes more of the real pain that he experiences after finding a possible mate whose advice to him is to “build a wall around your heart” if he wants to continue seeing her – a clear warning she is not where he is even after she slips and says, “I love you.”
David Rodwin is clearly a master storyteller, able to convey a script that sounds as if he is spontaneously relaying this litany of sexual and relationship encounters for the first time.  Sometimes it seems more the kind of talk one might expect in a men’s college dorm room after an evening of consuming a couple of six packs, and one cannot help but wonder if there is not a bit of exaggeration in how many times he actually had sex in some of the more rambunctious outings.  (Eight? Really?)  And there is some unease in wondering if he deserves quite as much sympathy as we are increasingly willing to give him as he tells only his side of the story for each encounter/relationship – especially in light of the current #MeToo revelations.  But there is a sense of genuine honesty and even humbleness that David brings to his telling, and he does hook us in enough amidst our laughter and opened mouths in amazement in order for us to hope that maybe there is a happy ending for him coming at some point.
In the end, there is a possible lesson or two for us all from his experiences that often seem straight out of a National Enquirer, tell-all article.  When David at one point realizes that he may in fact not be successful in his hunting for a partner, he admits, “For the first time in a long time, I didn’t know where I was; I didn’t know how to get there; and there was nowhere else I wanted to be.”
The look of calm satisfaction and the quiet, reflective tone of his voice at that moment are very different from that initial, diatribe yell he leads against Tinder (and thus, against online and maybe all dating).  Besides providing us with a hilarious, titillating romp through his past couple of years of prowling online for sex and maybe more, David Rodwin also gives us in F*ck Tinder: a love story some things to think about in appreciating the relationships we may already have and/or the patience and perseverance we should employ in seeking our next true love – or loves.
Rating: 4 E
F*ck Tinder: a love story continues two more evenings on April 25 and May 8 at PianoFight’s Mainstage, 144 Taylor Street, San Francisco.  Tickets are available online at http://pianofight.com.